Getting Scammed in Thailand 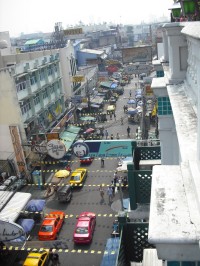 We hadn't been in Thailand for 10 minutes before we got scammed.

We were in the airport and I had just gotten some money out of the ATM. We needed to get to a cheap hotel called "D&D Inn" which was recommended to me by my buddy Ben from Brisbane, Australia.

There were some guys on the floor above us looking down at us saying, "Taxi!" So we went up to follow them to their taxi.

First red flag - none of these guys had any official taxi company logos on their shirts and none of them were wearing an official badge.

But I kept following them thinking that it's just done a little differently here in Thailand.

Second red flag - we got to the car and it was unmarked.

This looks shady as heck. I told the guys, "Look, this car doesn't say 'Taxi' on it." They ensured me that it was the official airport taxi, that's why. William had already put his bag in the trunk. A little hesitant, I slid into the back of the car.

Third red flag - all three of the guys that were taking us to the car got in with us.

That was it. Something seriously wrong is going on here. The car started to pull out but I demanded that they pull over and let us out. They acted all confused but eventually let us out.

One of the guys kept hassling me all the way back inside the airport. We eventually lost him though.

William and I got a drink of water and then headed back out to see if we could get into a car that actually said, "Taxi" on it with a single taxi driver.

We were met by some other guy who tried to get us into another unmarked car. I told him that I was only going in a car that said "Taxi" on it. So he took us across the road to several marked taxis. There stood the shady guy who hassled me into the airport. It was the guy's friend I guess.

So we get in and the hassle guy got in with us. As the driver started to drive away from the airport the hassle guy started saying, "You pay now! You pay now!" We were like, "Dude, chill!" And then he made the taxi driver pull over and demanded that we pay $1,500 apiece.

I gave him 1,500 baht and told him we'd pay final 500 baht when we got to the destination. He didn't like that deal, but he took the money and got out of the cab. Then the taxi driver took us to the hotel where we paid him 500 baht.

Then the taxi driver tried to hit us up for more money saying that he paid two tolls on the way over and we owed him 70 more baht.

I obviously didn't give him anything more.

A few tips when you travel to Thailand:

« How to Protect Your Laptop from Thieves..
You Wanna Go to Cambodia? Ok. »

You two will have to face the challenge and figure out their system and body language.

Traveling a difficult country, not that Thailand is difficult, other countries are will be easier.
Nomadic Matt wrote on March 23rd 09 at 07:18AM
there's an airport bus direct to Khao San for 150 baht.

and never take a tuk tuk...
Anil wrote on March 23rd 09 at 02:40PM
Always a good idea to know how much a ride will cost before getting to a new place.

I've seen similar scams in India and other places in Asia. I'm sure they are common in many parts of the world.
SammyK wrote on March 23rd 09 at 09:01PM
@WorldCabFares @Kevin @Nomadic Matt: Thanks - I've changed it to 300 baht in the post.

@Nomadic Matt: Yeah, I totally didn't read up on Thailand before I came. But your page, "Getting Off the Tourist Trail in Asia" is our guide for the next few days as we plan our trip.
Eric Blair wrote on March 24th 09 at 09:36AM
Wow. Lame. I would've fought and probably gotten killed. So it could've been worse haha Be more cautious. And que les vaya bien.
Michael wrote on March 24th 09 at 08:20PM
Yep, you guys got scammed!!!

I went to Suvarnabhumi Airport many times and it's easy to get scammed. I understand!

You guys have to go to the OFFICIAL TAXI DESK on the first floor....following the taxi signs from inside the airport terminals. DON"T FOLLOW ANYONE ELSE!!!!!

Therefore, the importance of researching your NEXT DESTINATION before taking a plane!!!!! It's all written here:

You pay 50baht at the TAXI DESK. Then on the road, you pay for the HIGHWAY TOLL FEE (twice). At destination, you pay the meter fee (usually 300baht). You also get a RECEIPT that you can use to register a complain with the authorities if something goes wrong. There's a number on the form.

So you guys TOTALLY GOT SCAMMED BIG TIME!!!!!!!! I"m sure the Thais that set you up were having a good laugh.
Jimmy wrote on March 27th 09 at 07:52AM
I got scam with similar situation too, as soon as i got to airpot in bangkok, there one guy approach me, I didn't realise that his cab didn't have a meter.. so i asked how much he would charge, so he told me 700 baht to anywhere in the city.. i agreed .. i found out later that there are public bus from airport to city which can cost you only less than 100 baht.... banggg! i got cheated!
ruthe wrote on March 30th 09 at 10:12PM
Tsk tsk tsk! Unofficial taxis take advantage of tourists in all countries I guess. The first time we were scammed on a trip was for a taxi ride ("broken meter") in Rome! I think it's one of those things you have to experience at least once when you travel...like a badge of dishonor! LOL great tips though.
Jamie Powers wrote on April 16th 09 at 08:18PM
Way to go Sam! Good job trusting your instincts and heeding the red flags! AND for demanding they let you out! I'm sorry it cost you so much. Bry and I got ripped off on those lemonades once...and that was just Kauai!
Peggy wrote on May 28th 09 at 06:05PM
We had a similar taxi scam in Paris,they know who the tourist are!! Beware. Say hello to my daughter Stephanie in Chiang Mia
kevin wrote on July 14th 09 at 09:20AM
Is it just me or was this a hilarious post. It did sound pretty scary though that you got harrassed by that but it did make me laugh. looking forward to walking out of bangkok airport now in few months thanks for the heads up
Jari wrote on July 15th 09 at 11:22PM
Ouch! 2000 baht for a Bangkok taxi is hardly budget travel... Better check the price level before going to new countries.
Wayne wrote on July 16th 09 at 06:31AM
My friend just got back from her Asian backpacking tour and she too was scammed in Thailand. She wasn't scammed by these taxis, but she was scammed by these "tiger shows" where they were asked to pay for 6,000 baht. Tsk!
Juliet wrote on July 19th 09 at 01:11PM
The trick with backpacking is to not trust anyone, don't get in until the price is fixed, don't pay until you get there, get out and walk if necessary. Do it all with a smile on your dial and don't back down. Travel in pairs always too. do your homework on a countries scams before you arrive. and expect to be done over anyway, at least if you only get done over once in a while it'll be better than every other day.
Ken wrote on July 28th 09 at 04:48PM
Why didn't you just follow the signs in english to the proper airport taxi rank? It ain't hard.
Ellie wrote on August 26th 09 at 07:54AM
I think this advice applies to whatever city you travel to, whether you're in Europe or the other side of the world.
I once got charged £7 for crossing Marrakech (the last day of my trip) - which I knwo is not alot of money really, but it is as 2 days before it had cost me around about 20p (I therefore gave the driver double what he asked for) - always check that there is a metre!!
John wrote on October 7th 09 at 02:38AM
wow, you guys are stupid. common sense and street smarts go a long way.
The incredible story of how two recent college grads are traveling around the world on an impossible budget.
More...
Archived Photos
Blog Archive »
Budget | Press | About | Make A Gift | RSS Feeds | Site Map | Contact
Copyright ©2008-2022 TwoGuysAroundTheWorld.com. All rights reserved.
Site design and development by SammyK.