Cambodia Rocks My Face Off 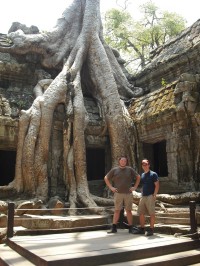 William and I have been busy little bees doing cool things in Cambodia which would explain why I'm a little behind on video podcasts.

We've been motorbiking around Cambodian villages, relaxing in hammocks on tiny islands, walking through temple ruins created by a culture in the 12th century, eating crickets and spiders, and most importantly, hanging out with monkeys.

All of that stuff will be coming to a video podcast shortly, but for now to keep you from being at a complete loss of video fun, I present to you a new series: the microsode.

A microsode is even shorter than a minisode, but I can release them when I'm behind on minisodes.

To kick-off the microsode series, I have posted the long-awaited video of William learning to surf in Lennox Head, Australia. I know William's mom has been anxiously awaiting that one.

Right now we're in Phnom Penh again which is our last stop before going into Vietnam. We have quite an enjoyable plan for Vietnam, but it's a secret. You'll know soon enough.

Alright, I'm off to go edit some minisodes... and at about 5 hours per minisode, I'll be going at it for a while...

« Thanks for the Lonely Planet Win!
Oh, Vietnam - How Little I Know You »

Kevin wrote on April 2nd 09 at 01:04AM
Hey, glad to hear you're having fun in Cambodia. If you visit HCMC, I strongly suggest you contact Saigon Hotpot (saigonhotpot.com) - it's a group of college students who give tours for free. They're a great group and showed us all around the city. Take a look!
Sam's Mom wrote on April 2nd 09 at 06:19PM
Cute video. It seems like each one has it's own personality. Very Cute.

Who knew you'd be hanging out in Cambodia?! I can't wait to hear about your adventures.

Mom
Jamie Powers wrote on April 16th 09 at 08:23PM
"We've been motorbiking around Cambodian villages, relaxing in hammocks on tiny islands, walking through temple ruins created by a culture in the 12th century"


-----> as Memaw would say, "I have little green men dancing on my head!!!"
Nomadic Matt wrote on April 16th 09 at 10:18PM
cambodia rocks my face off too. its one of my all time favorite countries
The incredible story of how two recent college grads are traveling around the world on an impossible budget.
More...
Archived Photos
Blog Archive »
Budget | Press | About | Make A Gift | RSS Feeds | Site Map | Contact
Copyright ©2008-2021 TwoGuysAroundTheWorld.com. All rights reserved.
Site design and development by SammyK.