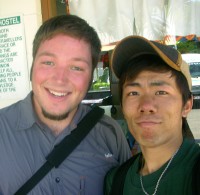 Every once in a while you meet someone while traveling that has a special quality about them that makes you say, "What make them different?"

A few days ago as I was staying a hostel in Coolangatta, I noticed a guy - looked Asian, that was kind of quiet, but you could tell he was a nice guy. Always giving a friendly nod and such.

A few days had passed and I had seen him several times passing through the hostel, but had never said anything to him.

One evening, I was cleaning dishes in the kitchen and saw him cooking. I couldn't take it anymore, I had to say something.

"I'm Sammy by the way," as if we were already in mid-conversation.

"I'm Shoyu," which sound's exactly like "Show You". Although I had never heard that name before, I figured it'd be easy to remember. Just "Show You" something.

A saw him a little later on and I said, "Hey Shome!"

We laughed about the name blunder and began a conversation that went on for ages.

Shoyu lives in the mountains of Japan in a Buddhist Temple. How cool is that?!

As soon as he told me he was from Japan, I told him a few Japanese phrases I learned from the Japanese kids I hung out with in Middle School like, "Awesome," and "Will you marry me?"

We started talking about languages and being the obsessive linguist that I am, I started asking him about Japanese grammar.

After a few translations like, "The boy kicked the ball", I quickly picked up on how Japanese denotes the subject and the object. It's done by inflections on the words, not the word order like in English.

I quickly threw back a different sentence in Japanese at Shoyu. "The ball kicked the boy." He was quite impressed that I figured out that aspect of Japanese grammar so quickly.

Japan is now on one of my must-see countries list.

Before Shoyu left the next day, we sat outside waiting for his bus. He pulled out a tiny box and opened it to reveal a bunch of colorful little square sheets of paper with designs on them.

He said, "Pick one," and I pointed to the red sheet with little white flowers on it.

He pulled it out and carefully began to fold it into different shapes. After about a minute, he handed me an origami crane - perfectly folded together.

« We've Been Nominated! We Need Your Help!
How to Protect Your Laptop from Thieves.. »

Kyle wrote on February 27th 09 at 11:22PM
That is so awesome!
i love meeting new people like this!
Nomadic Matt wrote on March 1st 09 at 07:01AM
you should for sure go to japan..its beautiful
Jamie P (sister) wrote on March 8th 09 at 06:05PM
Dallas was watching TV and the voice on the show said, do you know how to say "hello" in Chinese? All of the sudden...Dallas said it!!! Bryan and I looked at each other w/ shocked facial expressions!

(This was a comment on linguistics...not b/c I think Chinese and Japanese are the same ;)
The incredible story of how two recent college grads are traveling around the world on an impossible budget.
More...
Archived Photos
Blog Archive »
Budget | Press | About | Make A Gift | RSS Feeds | Site Map | Contact
Copyright ©2008-2021 TwoGuysAroundTheWorld.com. All rights reserved.
Site design and development by SammyK.