Things You Should Know Before Flying to Chile 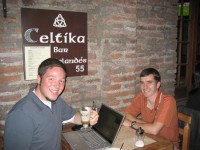 We made it! We're in Santiago, Chile! Our contact came through and is providing us with an awesome home stay for the week that we're in Santiago. We have our own room and bathroom with hot water and toilet paper.

After you've slept in some cheap, shady hotels for a while, you start viewing toilet paper and hot water as luxuries. So to us, we're living in the Ritz for free.

We were told by some that Chile is a very expensive place and that we'd blow our budget here. That made me worry a bit about coming here.

I thought my fear was confirmed as soon as I stepped off the plane because the customs people looked at my passport and said, "Oh, you're an American? That'll be $131 to enter our country."

WHAT!? $131 just to enter the country because I'm an American!? Apparently that's the exact amount we charge Chileans for entering the States.

I don't know if I was more angry about paying the unexpected $131, or if I was mad that William somehow passed through customs without paying the fee. As I was waiting in a line full of angry Americans and thinking about giving the Chilean government 8.7 days of my year of travel, William was on the other side of customs casually browsing a store while listening to "I kissed a girl".

Despite the initial fee, so far, we've gotten by on less than our budget each day.

From the airport we found a taxi that took us to our home stay for $30 ($15 apiece). That's cheap considering I paid a taxi driver nearly $70 to take me half the distance while I was in Michigan.

We went to the grocery store to buy our food for the next few days. Last night was spaghetti ($1) and breakfast was a banana with granola and box milk ($0.90) and for lunch, tuna cubes and cheese on the Chilean equivalent of Saltine crackers ($2.50).

$4.40 ain't bad for three meals. We were told that even if you buy food from the grocery store, it'd cost about $7 a meal. Lies! But I'm glad those were lies.

That means we get a bus to take us at night, we sleep on the bus and we wake up the next day in the new city. No need to pay for accommodation. For us budget travelers, an overnight bus ride is just a fancy way of saying "free accommodation."

So it looks like Chile is definitely doable on the $15-a-day budget. All we need is a few more contacts from CouchSurfing so that we can crash the next city.

Daniel wrote on October 19th 08 at 07:23AM
Yeah, I've found that when people tell you things are "too expensive," that means that their tastes are "too expensive." You guys are full into budget survival mode and will do just fine.