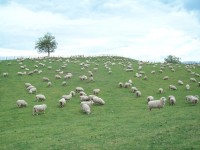 William and I passed through a town called Matamata here in New Zealand. It's got rolling hills of green covered with sheep.

Matamata may be its name on the map, but the rest of the world knows this place as the Shire (where the hobbits lived on Lord of the Rings).

We had the option of going on a tour of the grounds, but it was really expensive and there's only a little bit of the original movie set left.

We were told by the locals that it was boring. They just have these colored sticks in the ground that say, "The bridge was here" and so on.

So not wanting to blow $30 on looking at colored sticks, we ate lunch on a picnic table just outside of the entrance of the former move set. The whole time we were eating lunch, all we could hear were sheep "bahhhing".

To say there was a lot a sheep would be an understatement. There were so many sheep at one point that we were stuck in the parking lot and couldn't get out until the sheep herders came and moved them.

You'll get to see just how many sheep there were on Minisode #5 which comes out right before Christmas.

But as for now, I must go do that thing I said we were going to do yesterday but we couldn't because of bad weather. Hopefully the weather will hold out and Minisode #4 will be the awesomest ever. T-minus 1 hour and 30 minutes...

« New Zealand - Land of the Amazing Kiwis
Where'd all the money go? »

Ryan wrote on December 17th 08 at 03:23PM
As in shepherds?
The incredible story of how two recent college grads are traveling around the world on an impossible budget.
More...
Archived Photos
Blog Archive »
Budget | Press | About | Make A Gift | RSS Feeds | Site Map | Contact
Copyright ©2008-2021 TwoGuysAroundTheWorld.com. All rights reserved.
Site design and development by SammyK.