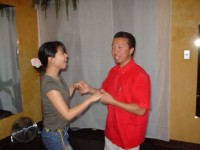 I found the guy!

Dancing has been the single most influential aspect in my life over the past 3 years. It all started in 2005 when I came to Antigua to learn Spanish at a school called "Casa de Lenguas." I saw a sign posted for free Salsa lessons. I thought it'd be fun to go so I got a bunch of my fellow classmates to go with me.

We had a great time. We learned some very, very basic Salsa steps, but it was just enough to spark something within me that would soon become an obsession.

Fast forward a year later and I'm taking dance lessons at a studio in Lexington called "All That Dance." There I was introduced to a dance I had never heard of before called "West Coast Swing."

At first, I hated the dance - it was too hard to dance. For some reason - maybe it was the cool music you could dance it to - I kept dancing it. Within a few months West Coast Swing became my favorite dance.

Just as West Coast Swing started to take the place of Salsa in my life, West Coast Swing world champion Cody Melin came to Lexington to teach, and my love for WCS soon became an official obsession.

I have a bit of a personal goal on this world trip. I want to learn a new dance in every country I go to. Not just any dance, but a dance that is native to the country. In Guatemala, there are many native dances that, for example the Mayas danced but I haven't learned any of those. The dancers here seem to think the Merengue is more Guatemalan than Salsa.

So far I've learned a cool Bavarian dance (from Kathi, the German I met in Panajachel) and some Bachata which is a dance I could see myself dancing a lot more if I found a group of Bachata dancers.

I'm learned Bachata at a studio here called "Salsa Max". I went in there when we first came to Antigua and asked them if they would be willing to exchange Salsa lessons for West Coast Swing lessons. Surprisingly, they were cool with that. So I've been hanging out at that studio a lot.

But the whole time I've been here, I've been searching. Searching for the guy - the guy who taught me my first dance lesson ever. I had no idea what his name was or if he even lived in Antigua anymore. I did happen to have a photo of him (above) that I had posted on my personal site back in 2005, but that's all I had to go on.

About a week ago, I saw a guy jogging down the street and I could have sworn that he was the guy I was looking for, but he passed by so quickly, I didn't have a chance to stop him. Then a few days ago, the same guy jogged pass me. That's got to be him. But again, he was too fast to stop.

Last night I got together at Monoloco (a cool hang-out place) with a bunch of new friends I've met through CSA, Salsa Max, and random encounters. It was great. I was in a totally foreign place and saw a lot of familiar faces.

Afterwards I went to Las Sin Ventura to dance some Salsa and again, saw a lot of familiar faces. I was dancing with this one lady from England and people I knew kept passing by and saying hi and she was like, "Wow, you know a lot of people around here." But I've only been in Antigua for two weeks.

That's one of the things about dancing that I love so much. You can go to a place where you know absolutely no one. I mean not a soul, and because of dancing, you will befriend so many people that you will run into them in random places around town. That happened to me when I stayed in Michigan - all because of dancing. That makes me happy.

Anyways, not to get too sidetracked here, after a few dances, I looked in the corner of the dance studio and there sat the jogging guy! I walked right up to him and he looked up at me and indicated that I looked familiar.

I asked him if he was a dance instructor and he said he was. This is the guy! I found the guy! I told him that three years ago he was my first dance instructor and now I dance a whole lot in the States and have become obsessed with West Coast Swing. I thanked him and shook his hand. You could tell that he was really pumped and had a huge smile on his face. His name is Julio.

« A Weekend in Panajachel
The Solutions to Our Video Podcast »

k wrote on October 8th 08 at 09:53AM
nice
The incredible story of how two recent college grads are traveling around the world on an impossible budget.
More...
Archived Photos
Blog Archive »
Budget | Press | About | Make A Gift | RSS Feeds | Site Map | Contact
Copyright ©2008-2021 TwoGuysAroundTheWorld.com. All rights reserved.
Site design and development by SammyK.