A Taste of Home in England 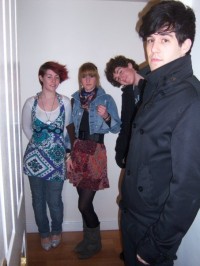 After 11 months of non-stop traveling I have to say that I'm really starting to miss my family and friends. I don't know if "homesick" is the proper word to use, but I do want to be home soon.

Despite that, these past 3 weeks I have been given that extra push to get through to the end of the journey around the world. That push came from the Speirs family.

I met an English-American guy named Jon in the States last summer while I was interning for XXXchurch. I knew he lived around Leeds, so when I was in the area, I shot him an email and came and stayed with him, his mom and his 4 siblings.

I have to say, I've never felt so much at home while traveling abroad. Staying with the Speirs family really felt like staying with some cousins I haven't seen in a while.

I would spend hours in meaningful conversation with Jon and his mom. Jon is quite the philosophical thinker and it was hard to not talk about everything from theology to ducks in boxes. Jon is like a combination of my two good friends D-well and David Potter.

I got to go "paddling" (walking in a creek) late at night in order to get into a closed park with Jon's sisters Hanna and Alice. Once we got in, Hanna fell on her butt on multiple occasions for various reasons. We also danced some Cha Cha together on the faux stage.

Jon's youngest brother Seb made some interesting candy that seemed to be disgusting at first, but was very addictive. I think it was something like "tomaco" like Homer Simpson made.

I went with all the siblings to a crazy abandoned communications bunker at night. There were these massive satellite dishes that you could walk around in. And the abandoned bunker was like something out of horror film inside. We all went inside the dark bunker in a close group with one wee flashlight. Jon's brother Pat and Hanna both thought they heard a woman's voice inside. Spooky.

Earlier this past week Jon's cousins came in from Scotland and the fun continued. We played some great card games like Nerts (which is a Powers family favorite.) We danced a folk Scottish dance and some West Coast Swing and ate hummus by the bucket loads.

The other night I made everyone fried rice but forgot to buy the key ingredient - soy sauce. So I used whatever was left in the cabinet which wasn't much. It was the worst fried rice I ever made, but the whole family was really nice and ate it anyways.

That same night Jon's cousins Lisa and Sarah made some great hummus. And Jon's mom made an insanely tasty cheesecake topped with fresh fruit. Oh man was it good.

It was hard to have to say goodbye to the Speirs family today, but they completely re-energized me and gave me that little taste of home that I needed in order to finish out this trip. I really can't wait until they come to Kentucky and can meet my awesome family. Sarah already vowed to win in a game of Nerts against my great aunts. I don't think she knows what a mighty big commitment that is.

« Jammin' to Tiesto with Groundskeeper..
What happened to TGATW? »

Cheers Erin
elclinto wrote on August 21st 09 at 11:23AM
Ah man, that's rad. I miss Jon.
Gloria wrote on August 24th 09 at 02:27PM
I just wanted to say great to have you blogging again. I always look forward to your blogs and videos and have been missing them.
Gloria Lin wrote on August 24th 09 at 02:30PM
Oops, I should have mentioned that I've been following your blog for a while but this is my first time posting. Hope the rest of your trip is great!
Kevin wrote on September 2nd 09 at 01:34PM
I'm getting ready for a few days in Iceland, so I'm looking forward to hearing about what you did there!
marc wrote on September 6th 09 at 02:58PM
Keep on going! Big hug!
lauren wrote on September 13th 09 at 09:14AM
Keep your spirits up, travel is its own reward and your family seems to be staying connected with your blog!
Web designer wrote on October 16th 09 at 03:55AM
I honestly love this website. Your posts help to remind me why I love traveling on vacation so much. You seem to really love your site.I love keeping up with the latest travel tips online. Keep up the great work.
Shawn wrote on October 27th 09 at 02:29AM
So not a word in over four months?
The incredible story of how two recent college grads are traveling around the world on an impossible budget.
More...
Archived Photos
Blog Archive »
Budget | Press | About | Make A Gift | RSS Feeds | Site Map | Contact
Copyright ©2008-2021 TwoGuysAroundTheWorld.com. All rights reserved.
Site design and development by SammyK.