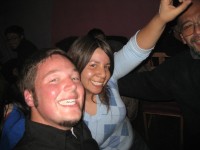 Yesterday was Halloween. I certainly miss being with friends in the States. I'm sure there was a rocking awesome party at Ashlee's house. What did you guys dress up as?

After being on a boat for 36 hours and living on cheese, bread and peanuts for a while, William and I treated ourselves at a sit-down restaurant in Coyaique, Chile yesterday. I ordered a massive club sandwich and a veggie salad (since bread and cheese doesn't offer a whole lot of essential vitamins.) We also ordered dessert - a big slice of chocolate cake with a side of ice cream.

Needless to say, we nearly blew our entire day's budget on that one meal.

After the meal I asked our waitress who looked about our age if there were any cheap places to stay in this little town. We aren't able to stay with a Couch Surfer here since there aren't any on the site that have an available space to stay. She said she knew of a cheap hostel and tried to give us directions to it, but we had no idea where we were. She offered to take us there since she was about to get off of her shift.

Then I asked her if there were any places to go dancing or something later that night since it was Halloween and all. She smiled and said that she might know of some places. Her name is Darly.

Darly took us to a hostel that costs about $10 a night. Not too bad. We dropped our stuff off and then headed to the supermarket to buy more bread and cheese and Darly came with us.

Along the way we made plans for partying later that night which would no doubt include dancing.

I don't know if we're getting better at making friends fast since we move around so much, or if Chileans are especially nice, but we had only been in Coyhaique for a few hours and we already had a new friend.

I also got on the CouchSurfing.com website to see if there were any people around town that might want to hang out later. I found a guy named Alex. He joined us for our nighttime festivities.

We started by going to a cool hang-out place that was decorated for Halloween. It was cool, but I bet Ashlee's house looked a lot cooler. We talked a whole lot about cultures and languages. Alex can speak English, but Darly can't, so unfortunately for William, the entire conversation was in Spanish.

William was able to catch on pretty well to the subject mater because I was telling them some very important aspects about Kentucky culture. I explained to them what the never-ending game Doorknob was and what a Dutch Oven was.

Oh yeah, and I explained the strange game of Sky Chipping. Of course when describing Sky Chipping, Dan Wray's name came up. Isn't that cool, Dan Wray? Chileans are interested in your strange game. In fact, Alex had a little notepad and was taking notes. I drew him a picture.

I forgot to explain what "pull my finger" meant. Oh well, maybe they'll get to experience that one first-hand if they visit the States. It will no doubt be a surprise to them.

I don't know why when talking about my culture back at home, the conversation usually turns to flatulence.

Afterwards, Alex, Darly and I went to a small dance club. William wasn't feeling the crowded room and smoke and went home. I don't blame him. But I had a blast!

I don't know what it was called, but the whole club was dancing some local dance to Salsa music. It looked like a cross between Salsa and the Carolina Shag. I didn't know the steps, but if I danced back steps from the Salsa, it seemed to fit into the dance quite well. So that's what I did all night - Salsa back steps.

I stayed up until about 4:30AM dancing and hanging out with my new friends I had met just hours earlier. While dancing this new dance I had never danced before in a place I had never been before with people I had just met who speak a different language than I do, it hit me - this is so cool!

« Happy Halloween from Chile!
What Not to Wear in Torres del Paine »

2) I dressed up as Jim from The Office.

3) What the heck is Sky Chipping?!
william wrote on November 4th 08 at 05:19PM
Scott
1) Sad we missed it
2) Awesome
3) You don´t want to know, but if you do, ask Dan Wray.
Brent wrote on November 5th 08 at 08:22PM
Guys, loving the podcasts. My wife and I are totally cheering you guys on. Would love to see you look around a little more. You are in some of the most beautiful places in the world and yet film the bus rides. Good luck and we'll help those bank accounts if they get too low.

Your Canadian Following
Brent wrote on November 5th 08 at 08:22PM
Guys, loving the podcasts. My wife and I are totally cheering you guys on. Would love to see you look around a little more. You are in some of the most beautiful places in the world and yet film the bus rides. Good luck and we'll help those bank accounts if they get too low.

Your Canadian Following
Ashlee wrote on November 6th 08 at 03:49AM
Sounds like fun! I was Cleopatra. We really missed you guys!
David wrote on November 6th 08 at 10:38AM
Sam - I am excited that you are enjoying Chile. I have gone as far as Chiloe. Have you guys tried chicha de manzana yet? I had that homemade apple cider there. Keep up the podcasts!!
The incredible story of how two recent college grads are traveling around the world on an impossible budget.
More...
Archived Photos
Blog Archive »
Budget | Press | About | Make A Gift | RSS Feeds | Site Map | Contact
Copyright ©2008-2021 TwoGuysAroundTheWorld.com. All rights reserved.
Site design and development by SammyK.