First Few Days In Guatemala Sitting Behind A Computer 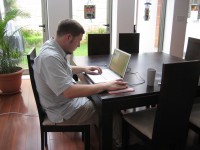 We arrived safely in Guatemala City, Guatemala early Tuesday morning. We were greeted with a swarm of Guatemalans and taxi drivers asking to take us to Antigua (which is my favorite city in the world right now, so it was tempting.) But Mark Smith picked us up and took us to his palace - I mean house.

So far we haven't spent a cent in Guatemala and we're living like kings. Andrea (Mark's wife) is an amazing cook and we have have eaten some amazing home-cooked meals. We have hot showers (which is certainly a luxury in Guatemala) and cozy beds.

Thelma is Mark and Andrea's housekeeper. She washes our clothes every day. She doesn't speak any English, so it's good to get to practice my Spanish with her occasionally.

William and I are discussing our plans while we're here. We want to do many things, but for right now in the next few days, I'll be tied to my computer. I have a lot of undone work that I have brought with me from the States. It really sucks to be in an exotic place like Guatemala and be sitting inside all day.

But as soon as I'm done with my online chores, we'll be able to explore Guatemala like we want to.

By the way - I have fixed a few bugs on the site that were happening for people using Internet Explorer 6. I have a MacBook Pro, so it's a little harder for me to test my sites in a Microsoft browser. If you're using such a non-choice browser such as Internet Explorer 6, I beg you to make the right decision and upgrade.

p.s. Add cookies so I don't have to continue to type in my info every time I want to post a comment.
Heather wrote on September 19th 08 at 07:52AM
I am proud of you and a little jealous. Okay, a lot jealous! Stay safe and have fun!
David wrote on September 19th 08 at 12:59PM
cooookies! OM NOM NOM NOM!
The incredible story of how two recent college grads are traveling around the world on an impossible budget.
More...
Archived Photos
Blog Archive »
Budget | Press | About | Make A Gift | RSS Feeds | Site Map | Contact
Copyright ©2008-2021 TwoGuysAroundTheWorld.com. All rights reserved.
Site design and development by SammyK.