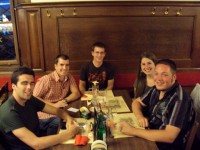 It's safe to say that Zurich is the most expensive city we've been to yet. By at least double our last most expensive city. I'm talking $12 Big Macs at Mickey-D's and $4 train rides that take you just two measly stops from where you are.

But the water is free.

Any public fountain around here is flowing with clean, refreshingly cold water from the Swiss Alps. So I fill up my water bottle often here... and I pee a lot too.

But thanks to my buddy Kenny who is working at the Google campus in Zurich, we've had free accommodation.

Kenny has been so awesome - he's taken us out to diner (which starts at $20 a plate for any sit-down restaurant), bought us drinks, hosted us for a few days, gave us a personal tour of the Google campus and spent a day showing us around Zurich. I'm so grateful for his kindness! Thanks Kenny!

And thanks Marsel! (That's Kenny's roommate from Australia.)

Zurich is one of the coolest cities we've been to so far. Even though it's the biggest city in Switzerland, it's only got around 300,000 people living in it which isn't much more than my hometown of Lexington, KY.

It's also home to famous Swiss banks. Which, by the way, I tried to open one.

Every bank I went into said, "Sure, you can open a bank account without being a resident of Switzerland. You just have to have to meet the minimum deposit." I'd ask them what the minimum was and they'd in turn ask me which country I had my residency in.

After failing miserably at trying to open my own Swiss bank account, I went out to a pub with Kenny a bunch of Google employees.

I was sitting at a table outside in the chill Switzerland air with a bunch of people I had just met. After about a minute, I realized that all these guy have Ph.D's in some insane computational stuff.

Since I'm considering going for a Ph.D myself, I started asking for some advice. I want to maybe go for a Ph.D in Computational Linguistics with a focus in semantic search.

After getting some good general advice about Ph.D's, we all moved inside since it was starting to rain. There I met Paul, another Google employee from Hungary. We were making general conversation with people around the table and he made some comment poking fun at languages or something. Then Kenny said, "Whoa, hold on, Sammy's a Linguist, you don't want to insult him."

Paul looked at me and asked, "Are you really a Linguist?" and I said, "Well, my degree is in Linguistics, so I guess so," and he responded, "Me too."

He's got just a few more qualifications than I do. You see, I've got an BA in general Linguistics and he's got is Ph.D in Computational Linguistics.

Oh man was I excited! I started asking him all about his thesis and how I was thinking about going to semantic search. He gave me lots of good advice and help to direct me on the right path as far as a good thesis that would be practical for the real-world and is also good thesis material.

I find it amazing how that small conversation had such an impact on my vision for my own future. I also think it's amazing how much impact we have on other people without even knowing it.

Just last night we met up with Simi and Anna from Zurich who we met during Christmas in New Zealand. They were the ones we sailed the little wooden boats down the stream with. And I also showed Simi how to dance some West Coast Swing.

Simi said that she went to a dance venue where they had West Cost Swing and she was the only one there that knew how to dance it.

Simi and Anna also told me that they Couch Surfed through South East Asia because we told them about Couch Surfing.

Although those are pretty small examples of how we influence one another, it's weird to think that we only hung out with Simi and Anna in New Zealand for Christmas afternoon and evening.

Think about how we as mankind influence people that we're around all the time.

I hope it's a positive influence.

« When in Rome...
The Swiss Alps Adventure »

Switzerland is one of those places on my "hope to visit some day" list.
Jane wrote on June 11th 09 at 08:03AM
Guys, I've been reading you for a while now, enjoying your video casts (which seem to have been put on hold :-) ) and as an aspiring documentary movie maker I have a qustion : what kind of an external mic do you use on the cam to get this good sound?
Anil wrote on June 11th 09 at 08:59AM
Southern Switzerland was one of the most expensive places I've ever been. I felt like I was carrying Monopoly money and even then didn't have enough.
Ellen and Mike Potter wrote on June 11th 09 at 04:41PM
Hey Guys ya must see "Interlaken" its two lakes sort of joined together and definitely one of the most beautifuls scenes there.
Heather wrote on June 12th 09 at 07:28AM
Beautiful post as always, dear cousin. Keep 'em coming... I'm living vicariously. ;)
Jean - OurExplorer Tour Guide wrote on June 14th 09 at 02:17AM
We influence and get influenced everyday as social animals. I think so long as no force, it's a good thing. :) Also, isn't it great to travel with a local who helps to make things so much easier and funnier?

http://www.OurExplorer.com
local guides, local wisdom
Stefano wrote on June 14th 09 at 07:43AM
Hi guys! Go to HB in Munich, nice Beer!!
Jamie Powers wrote on July 17th 09 at 03:22AM
Glad you got to meet Paul! Exciting!
Dan Stevens wrote on October 29th 09 at 01:40PM
Recently found your site and am enjoying your adventures. I found Switzerland extremely expensive, but equally as beautiful, and with great public transport
Autodidact911 wrote on April 8th 10 at 05:56PM
you can open a Swiss bank account for a minimum of 10 CHF. Go to any Laposta bank and you will get one no problem. Furthermore, if you think Zurich is the most expensive place you have been, I am guessing you have never been to Geneva or Tokyo. Don't complain about Swiss prices, I live here...
dariusmf wrote on December 14th 10 at 10:48AM
@Autodidact911