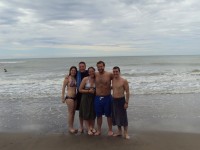 After several months in South East Asia, our journey has finally taken us to Europe.

We were greeted by my sister Mary Audrey and her husband Michael when we finally made it to Rome. They had been waiting for us for hours and hours. And it's all my fault.

I told them that we'd be arriving  on Wednesday the 28th of May. But the 28th is a Thursday. So I was only half-way right.

So on Wednesday at 10:30 am, Mary Audrey and Michael were waiting for us anxiously at a fountain in the middle of Rome. They waited there until late that evening and we never showed.

Like a dummy, I never gave them my flight info or time, so when they went into a travel agency to check on our flight, they had to look at all flights coming in from Thailand. But our flight flew in from the UK on a connection flight so they would never find it.

Finally, around 2 pm on the 29th, we arrived in Rome and immediately sent Mary Audrey an email saying that we were headed to the fountain. I had no idea that they had been waiting all day the day before.

Luckily, Mary Audrey was at an internet cafe checking her email at that very moment and we were able to reunite a few hours later.

The first thing we did was go to a pizzaria to try authentic Italian pizza. It was so-so. Not all pizzaria's in Italy are amazing.

We spent the rest of the day unwinding and catching up with each other.

Bright and early the next morning I met my friend Alison at the airport. As she came out of the baggage claim area I noticed that she didn't have any bags on her. Her bags didn't quite make it out of the New York airport.

So we headed to the train station to meet back up with the rest of the gang.

There were crowds of people all along the train waiting for the train doors to open. When they did, the crowds tried to force their way into the tiny openings with their huge luggage.

When Alison and I finally made it to the door, Alison hopped on the train and then all of a sudden the train doors closed leaving me and a whole lot of other people outside.

I tried to yell through the thick train window, "Wait for me at the next station!" She nodded to confirm that she could understand me.

I made my way out of the people who were still crowded up against the closed train doors. I turned and waited for the train to leave, but then the doors opened again. I shoved my way through the crowd and got on board immediately.

We rode into Rome and meet up with the rest of the gang. We went to the Vatican and saw some amazing stuff including real mummies! And we did the "spinning thingy" from Episode #1 in the middle of the world-famous Vatican square.

The next day we went to the Colosseum which is amazingly huge and beautiful.

Today Mary Audrey and Michael left and I was sad. :( Alison, William and I are now headed up to Pisa to see some leaning tower action. I'm thinking about taking a picture of me making it look like I'm holding the tower up. I'm sure no one has ever thought of that before.

« The Other Side of Couch Surfing
Holy Crap Switzerland is Expensive! »

Mary Audrey wrote on June 4th 09 at 07:54AM
Dude...you got there on the 28th, not the 29th. You're still messed up, haha!
The incredible story of how two recent college grads are traveling around the world on an impossible budget.
More...
Archived Photos
Blog Archive »
Budget | Press | About | Make A Gift | RSS Feeds | Site Map | Contact
Copyright ©2008-2021 TwoGuysAroundTheWorld.com. All rights reserved.
Site design and development by SammyK.