Roro - A Guy Who Works 6 Months Out of the Year 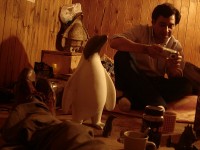 I wrote this while we were staying in Puerto Montt with Roro. I forgot to post it to the site, but since Roro is showcased in the latest podcast (Episode #11) I thought now would be a good time to post it.

We met up with Roro who is our first CouchSurfing.com homestay. CouchSurfing.com is a website that connects you to people from all over the world who will let you stay at their place for free for a few nights. That's one of the major reasons why we'll be able to travel the world for a year under $10,000.

So far we've stayed at Roro's house for 3 nights. And it's been quite an experience. Roro's CouchSurfing profile describes his place as "not much" which is not an exaggeration.

Roro is from an upper-class family. He used to have a good job and made good money. He now works on and off for six months out of the year and just hangs out for the rest of the year. He's got a "4-Hour Workweek" mentality.

He lives a no-frills kind of life. He lives in a small room in a house shared by about 10 other people. By "small room", I mean about 8 feet by 8 feet. His bed is some padding on the ground.

He buys cheap rice and bread at the supermarket and can cook a number of meals very well. His stove is a gas stove shared by the hose. The gas stove is hooked up to a propane gas tank - the kind you'd see under a grill.

There's one bathroom for the whole house - and there's no TP. You have to bring your own.

He has no car, no computer, no fancy nothing.

And that's just the way he likes it. He says he "quit the system." He refuses to let the system tell him that he is a rich guy that has to work 15 hours a day to maintain his wealth. So he chooses not to.

I have met people with this philosophy before, but I've never met someone living it. And that's one of the reasons I wanted to take this journey - to meet people from all over the world who view the world completely differently than I do.

Roro has been a Couch Surfer for about a year now and have had many people stay at his humble abode for free. He says most of the CouchSurfers are guys from Europe or the States who have everything and are looking for something different.

William and I can't relate at all. (That was sarcasm if you couldn't tell.)

Anil wrote on November 12th 08 at 06:47AM
That lifestyle always appeals to me, but like you don't know if it will actually ever happen.

Why is it harder to do less than more?!
Nomadic Matt wrote on November 13th 08 at 05:37AM
I wouldn't go that extreme...i mean i can't live without my computer....but i like his philosphy
kayla wrote on November 16th 08 at 09:56AM
aww.. that sounds so neat Sammy!!! Sounds like a blessing, even if it was a little room... :)
-kay :]
Andolasoft wrote on July 28th 11 at 05:45AM
Shound good. I really appreciate this wonderful your blog.
The incredible story of how two recent college grads are traveling around the world on an impossible budget.
More...
Archived Photos
Blog Archive »
Budget | Press | About | Make A Gift | RSS Feeds | Site Map | Contact
Copyright ©2008-2021 TwoGuysAroundTheWorld.com. All rights reserved.
Site design and development by SammyK.