We Bought a Car in New Zealand! Now What? 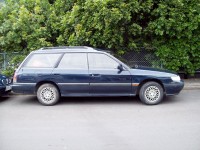 After asking the locals about the best method of transportation in New Zealand, we discovered that buying a car is the way to go.

So today we headed to a place where backpackers buy and sell their cars. There we found two German girls selling their '93 Subaru station wagon for NZ$2,200 (about $1,200 USD.)

They had just had some mechanical work done on it and it sounded like they took good care of it.

Given that it was half the price of the vans that were for sale and would use a lot less gas and was at a good price, we were sold.

Buying a car in New Zealand is a lot less complicated than in the States, but there certainly is a process you have to follow.

We had a legal check on the car to make sure there were no outstanding tickets that we would inherit. We had to do some 140-point mechanical inspection. We had to buy insurance (which you have to buy a minimum of 3 months at a time). And we had to transfer the title.

All that junk costs money. Not to mention the car costs money too! So I asked the two German girls if they would be willing to sell the car to us for a flat NZ$2,000. They discussed it amongst themselves in German for a few seconds and then said, "We will do that if you take us out for a coffee or something." 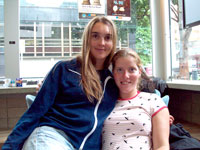 Wait a minute - the deal is that we get a discount if we take these two cute German girls out to dinner? SOLD!

We paid for the car in cash. It felt like some sort of shady illegal deal with all that cash spread out on the table.

I'm now very frustrated. We didn't plan. We haven't really planned any of this trip so far. We just blindly fly to a country, or hop on a bus and ride into some random town without planning a thing.

Sounds stupid? It is. I don't recommend it. Some may think it's cool - "living on the edge" and never knowing what happens next. But before you buy a stinking car, you should at least know one town you want to drive to.

We've been in Auckland for over a week now. That's more than ample time to plan a journey through New Zealand. But I was busy working on web projects and William was doing whatever he did all week long.

Neither of us planned. So what happened? We drove our car to a Couch Surfing friend's house and started to talk about where we'd drive with our new cool car. Then we realized that it would have been way better for both the time and the money to buy a car in the south island and drive it up to the north island since that's were Auckland is and that's also where we fly out of.

Either way, it would have been way better had either one of us planned just a little bit.

« Where are the Video Podcasts?
An Address For Christmas Packages »

If you don't use the car, that's okay. Just try to sell if for what you paid for it. I wouldn't wait until the last minute to sell, though, since you already have your plane ticket. Maybe you can sell it to two cute girls and require another trip out to eat.

Mom
SammyK wrote on December 9th 08 at 07:22PM
@Sam's Mom: Yeah, we'll probably be able to get more out of it than we bought it for. But our New Zealand trip would heave just worked out a little better had we planned ahead.

Love you too!
David P wrote on December 10th 08 at 09:17AM
+1 on looking for a buyer earlier than you think necessary so you can get a good deal. You may even make a profit on the car which would pay for a rental or a plane ticket.
Nomadic Matt wrote on December 10th 08 at 11:59PM
15 dollars a day!! woah!! it is a good thing the dollar is strong right now! Should you get to christchurch, i might be able to get you some free accommodation.
The incredible story of how two recent college grads are traveling around the world on an impossible budget.
More...
Archived Photos
Blog Archive »
Budget | Press | About | Make A Gift | RSS Feeds | Site Map | Contact
Copyright ©2008-2021 TwoGuysAroundTheWorld.com. All rights reserved.
Site design and development by SammyK.