You're Traveling the World? No big deal. 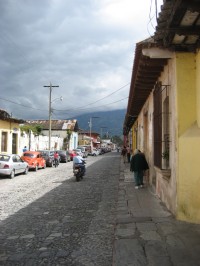 Yesterday's blog I wrote at this place called "The Bagel Barn" which had some really fast internet - a rarity in Guatemala. After I wrote the blog, I packed up my stuff and started to pay for my food. There were these three English people who came over to the table and asked if they could take our place.

We started making small talk as we were heading out and then it came out that all three of them were traveling around the world. William and I got excited because this was the first encounter we had had with fellow world travelers.

At first, I was about to say something like, "We've got to go find our host home," but then I thought - why am I acting all busy? I've got nothing to do all day long and these people seem really cool. So I sat back down at the table.

There was a married couple, Leza and Dave who had been to a billion places around the world already. I could tell that Leza's accent was not of the "BBC" variety and therefore was probably not from around London. I was right. I always get excited when I can tell the difference between various non-American English accents.

Hadley was a young guy, our age, who was also traveling the world for a year. Leza and Dave met Hadley a few stops back in their journey and the three of them had been traveling together since. It sounded like Hadley was about to take a different path than the couple after Guatemala.

When I told them that William and I made the local news because we were traveling around the world, they all laughed. Not just a "ha, ha, that's funny" kind of laugh, but a full-blown "that's the most ridiculous thing I've ever heard" kind of belly laugh.

We also let them know that we are traveling the world on $15 a day. When we told them we were going through England on our trip, they said that we'd bust our budget there big time. Supposedly it's the most expensive place on earth. Literally. They gave us their contact info so hopefully we'll be able to crash their place for a few days while we're in England.

David and Leza have a website about their travels around the world.

Our next video podcast is being uploaded as we speak. You know how I said, if all goes as planed, we'll have Episode #3 up by this afternoon? Well, in Guatemala, it's hard to have plans come to fruition as you intend. So, I'm hopping it will be up by tonight. I'm currently uploading at 7KB per second. That's slow. Really slow.

« My Favoritist City in the World!
Intense Spanish at CSA in Antigua »

Joseph wrote on September 29th 08 at 03:31PM
From a fellow American who's travelled much of the world (but not all at once like you are, and sure as hell not on $15 a day!) I can say that you're experience is spot-on - the fact that as Americans we DON'T consider it part of our birth right to piss off around the world for a year after school is completely foreign to most Europeans. It's not the only thing they've figured out right, I'll say that!

I'm following your twitter updates, keep those coming as the bounce me to your blog. And if I catch you approaching cities I know well, I'll try to drop you some pointers (although they may bust your budget - well anyway).

Happy travels!
wesley fortin wrote on September 29th 08 at 09:34PM
I love you guys I feel as if you are on a journey that I have longed for all my life. Keep up the good work and keep reaching others for Christ.
David P wrote on September 30th 08 at 12:53PM
"I don't know how to drink this without getting froth all over my face." Definitely a Kodak moment averted :)
Vero wrote on September 30th 08 at 02:41PM
You have the opportunity of a lifetime to gain much knowledge and have fun! Please keep in mind the cultures you are visiting and the importance of remaining sensitive to the people and environment....it's so easy to get carried away. I'd LOVE to see/hear what you learn about the local places you visit...this is a great medium for educating people about the beauty of other cultures..beyond the typical American perspective. Happy Trails!
Kelly wrote on October 26th 08 at 12:50PM
I just stumbled amongst your very attractive website. I just wanted to remind you about couchsurfing.com and was wondering if you knew about it. It's awesome and free. I used it so much on my last trip through Europe and plan to utilize it on my RTW trip in a few months. I also host people in Key West, FL. Check it out. I'll keep checking for awesome updates.
SammyK wrote on October 27th 08 at 08:02AM
@Kelly - Thanks! We are actually staying with our first Couch Surfer right now. It's awesome. You'll be seeing a lot of Couch Surfers on the site in the coming months. Where are you going in your RTW trip in a few months? Maybe we could meet up somewhere.
Dave wrote on June 4th 09 at 05:33AM
Hey guys, someone told us that we were mentioned in a blog - and it's you! glad to see you are still travelling, we are home now after 14 months and 16 countries. love to say that it's good to be back home but that wears off quickly! keep up the good work, the blog is fantastic. Dave as in Dave and Leza!
Leza wrote on June 4th 09 at 07:43AM
Hey guys!!! A big hello from back here in London...we've already been out with Hadley a few times as he lives in London too - you meet fantastic people when travelling and can make some life long friends...keep on keeping on - we aren't back in our house yet - it's still rented out - and we are crashing in a friend's spare room so we don't have a place for you to kip unfortunately BUT if you pass through London please get in touch and we will come out and show you the sights of our city..any time! Make the most of your travels - coming back to reality is a hell of a shock!! Leza xx
The incredible story of how two recent college grads are traveling around the world on an impossible budget.
More...
Archived Photos
Blog Archive »
Budget | Press | About | Make A Gift | RSS Feeds | Site Map | Contact
Copyright ©2008-2020 TwoGuysAroundTheWorld.com. All rights reserved.
Site design and development by SammyK.