The Other Side of Couch Surfing 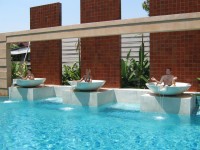 For 7 months we have been surfing Couches around the world. It has been amazing and we've met tons of awesome people. But we have always been the one surfing the couch. We have never hosted anyone.

Mid-May marked the 8th month anniversary since the beginning of our journey. And this whole month we've been staying in Chiang Mai, Thailand. We rented a nice serviced apartment called "The Grand Napat" and finally changed our Couch Surfing status to "Couch Available".

We have hosted people from Argentina, Canada, Wales and several from England.

I thought the experience would be different as a host. But in reality, it wasn't all that different. It was just as fun as surfing someone else's couch.

There were two couples from the UK that stayed with us for a few nights. After their stay they found some longer-term accommodation in Chiang Mai. But we still got together many times to hang out.

We went for pizza (several times... like every time... James and Stacey are obsessed with pizza), we had races in the pool, we watched sweet movies, we hung out with my friend Ploy from here in town, we played with tigers... and Paul and Alwen even helped doctor William up! (He should have already blogged about "being doctored up", but I won't steal this thunder).

It has been a fantastic month in Chiang Mai. And the whole time I've been working on web projects to fund the rest of our journey (and pay taxes...)

BTW - I should clarify the ambiguity in the last paragraph. I'm not funding William. He's still running on funding "from other sources". It sounds shady because it is. Just kidding... kind of. No really, I'm kidding... ;)

And in just a week and a half we'll be in Rome! And my sister and her husband will be there! And so will my good friend Alison from college! I can't wait! Europe will be so AWESOME!... and so stinking EXPENSIVE!

Side note: Since I've been working feverishly at web projects, I haven't been able to push out the Vietnam Special video series. I can't promise I'll be able to release it this week, but know that it is on it's way soon!

Fun Lilliy wrote on May 19th 09 at 02:55PM
When I was surfing for articles about Turkey I came across and article about a traveler (this really sounds that I am talking from ancient times) who wrote about staying in an organic farm in center of Turkey you get food and accommodation but you have to work and help on the organic farm… which to this backpacker was a good experience and he got to mingle with a Turk… these farms are mostly all over Europe its on the net .. Just a thought :)
Dad Powers wrote on May 19th 09 at 05:23PM
I am glad you updated, you Mom and Memaw were getting worried. I did not worry I know you can take care of yourself.
shane wrote on May 19th 09 at 10:20PM
Rome! Cool! One of my very favourite cities in the world. True Rome, and Europe in general, can be expensive but there can still be bargains to be had. For example if you like the world's best coffee for breakfast go to a cafe or coffee bar and have a donut and a coffee but, big BUT, don't sit down. Have it at the bar. Can be as much as a 5 euro difference in price - or at least double. We got great coffee for about a euro to 2 euros in most places. Again, if you sit down you pay double.
shane wrote on May 19th 09 at 10:28PM
When we first went to Rome we'd come from sunny Oz and steamy South East Asia in January. We boarded the plane in the sweltering heat of Singapore wearing only shorts and t-shirt. As the plane was coming in to land in Rome suddenly everybody got up and started putting on the layers - jumpers, coats, jackets, scarves, beanies. Oooh crap we thought. All our cold weather gear was in the hold of the plane. We didn't know our plane would park miles away from the terminal and we'd have to get a bus to the terminal at 7am in a balmy 3 degrees C. We put on a brave face and pretended it wasn't cold. The locals were very amused.
Benny the Irish polyglot wrote on May 20th 09 at 08:51AM
Hosting is the best!! I've mostly hosted and met the coolest people!
So, Europe already?? I've decided that I'll be in Prague all summer and will definitely be in a flat specifically for hosting. You're more than welcome to be hosted by me again :D
Hope to see you soon!
Eric Blair wrote on May 20th 09 at 09:57AM
Isn't it great hosting? I have hosted a few people here in Temuco and we've all had a great time. Meeting people is what it's all about my friend. I am the complete opposite of you, dude. I am really looking forward to surf with people instead of hosting.
Loran wrote on May 20th 09 at 11:03AM
My friend just started grduate school in Thailand maybe you can drop in on her. let me know.

also I saw a blog of yours from Oct about a trip to Semuc champey wanting to take the excursion do you remember who offered it?
Mills wrote on May 24th 09 at 07:36PM
Don't forget to get in touch when you are approaching UK as I have a whole host of dancers waiting for you. ;) Also I have some friends in Paris if you are heading through there. Mills xXx
Seth wrote on May 24th 09 at 09:20PM
Can't wait for the Vietnam Video Series!!!
Rossana wrote on May 25th 09 at 07:54AM
Bellisimo.......
Arvid wrote on May 25th 09 at 08:11PM
Do you make any money from the ads on your site? How many visitors are you getting a month? I just found your site and really like what you're doing--Keep on traveling!
Merel wrote on June 2nd 09 at 03:07PM
Rome can be freaking expensive, so just a little tip: You can drink all the water that flows. YES, that includes water from fountains. If not, there's a sign saying otherwise, but I only found 1 wee fountain in all of Rome that you couldn't drink from.
Seriously you won't get sick and if you still think I'm planning an evil joke, just watch or ask the locals :) they're very proud of their ancient (cleanest of the world) water system.
nomadicmatt wrote on June 2nd 09 at 08:54PM
i've never hosted anyone but if i ever get a semi permanent place, I plan too! glad to know its still good from the other side
Stefano wrote on June 3rd 09 at 03:43AM
I can see you are in Rome.
Welcome to the Eternal City, Best in the world!!!
The incredible story of how two recent college grads are traveling around the world on an impossible budget.
More...
Archived Photos
Blog Archive »
Budget | Press | About | Make A Gift | RSS Feeds | Site Map | Contact
Copyright ©2008-2021 TwoGuysAroundTheWorld.com. All rights reserved.
Site design and development by SammyK.