Minisode #14 - Isle of the Flies
Next Video 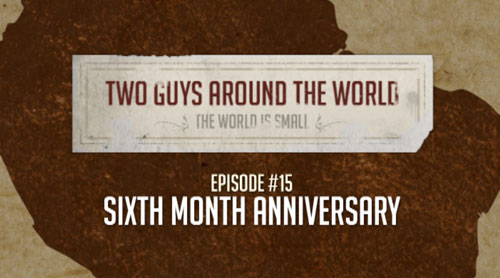 After traveling for 6 months, Sam and William look at the highs and lows of the trip so far and release never before seen footage from the past.

Kirsten wrote on March 16th 09 at 10:13PM
As you mentioned in this episode, it appears that your trip has been "one big ball of AWESOME!" I love it! Keep having safe travels and enjoy the rest of your adventure.
Corey T wrote on March 16th 09 at 10:31PM
Happy Anniversary! Thank you for taking us along on your adventure. It's been a great ride so far.

I love your observation about how safe it is to travel. That's a very good message to share.
danwray wrote on March 16th 09 at 10:40PM
well i could have told you that doing stupid stuff makes for good video...
Daniel Sendecki wrote on March 17th 09 at 05:52PM
Thanks guys — I am enjoying some vicarious travel courtesy your vidcasts. Much appreciated!
Kevin wrote on March 18th 09 at 01:08AM
another fun video. what kind of camera are you using?
Kyle wrote on March 18th 09 at 06:25PM
I laughed a lot in this one guys! Very funny and I enjoyed the recap and little explanations!

I can't wait to travel myself, especially because now I now its safe! My mom can't say anything now! :D
Daniel wrote on March 18th 09 at 07:27PM
How long ago did you realize that Episode 15 would correspond after Minisode 14?
Corey W. wrote on March 19th 09 at 10:56PM
Happy Anniversary guys! Six month one. . . that's paper right? So, money probably. lol

I can't say enough good things about your blog. The fact that you constantly and consistently put out these amazing videos in the midst of traveling is mind boggling.

And kudos for relaying hte information that the world is not as big, bad and scary as mainstream media would have us believe!

Egypt, Syria, and Albania is cheap to travel, and it is very safe to travel these countries like very place else. I would avoid western europe.
nickhoss wrote on March 25th 09 at 12:47PM
It's great to "hear" from you guys so often! Thanks for taking the time to make this video.
Ellen wrote on March 31st 09 at 08:19AM
Bed bugs!! Who could forget bed bugs...
Matthew wrote on April 13th 09 at 03:08PM
This video is really well done. What a great job at editing and what an great journey you have taken so far. I love how you have summed it up. Blessings on your next 6 months!
M wrote on September 23rd 09 at 02:30PM
What an inspiration! Just what I need. Im currently on a working holiday visa in England, and I've been here a month now -- kinda homesick. But seeing your site and videos took me right out of it and made me realize that this funk Im in is because I'm NOT using my time wisely while I'm in England. I'm just working 9-5p same old same. I didnt come here to do that!!!!!!!!

THANKS GUYS!!!
The incredible story of how two recent college grads are traveling around the world on an impossible budget.
More...
Popular Videos