Episode 6 - A Boat Ride from Mr. Shady
Next Video 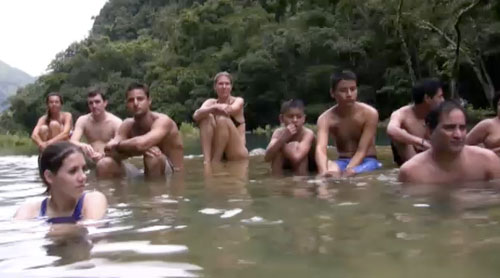 Scaling waterfalls with a sketchy rope in Semuc Champey. Sam can't sleep and our truck makes a breaking sound.

hahahhaa
Kyle wrote on October 17th 08 at 08:47PM
you guys are awesome! i wish i did half of what you guys are doing! what do you use to hold the camera out in front of you? its such an cool view. looks awesome. thanks for letting us all see a little bit of all your travels!
kat wrote on October 18th 08 at 11:13AM
this was awesome!! It makes me so happy!! i almost feel like i'm there with you! miss you guys
Sarah wrote on October 18th 08 at 04:24PM
I just wanted to let you all know that I am a Spanish teacher in Texas and am using your videos for my Spanish 4 AP class. We watch the videos and discuss the cultural elements. Usually, I don't use videos because they are old and horribly boring. The students range from 15 to 18 years old and they are really into your trip. So keep traveling and keeping us posted. Thanks for sharing your journey with us.
SammyK wrote on October 18th 08 at 06:32PM
@Kyle - Thanks, ;) I'm glad you like the view. I'm personally getting sick of seeing my own face on camera, so hopefully you see a bunch of fresh faces soon.

But the trick is actually quite simple - we use a tripod. All we do is extend the legs but don't open them and then tilt the camera to point down the tripod.

@Bruce - Good point. Perhaps this deserves a bit of an explanation. Jose, who is the "native speaker" you are referring to, was our excellent tour guide while we were in Semuc Champey. He has given this tour a number of times and knows his audience well - gringos who barely speak Spanish. So he speaks in terms his audience is likely to understand. A new speaker is more likely to understand the word "man" as opposed to the word "male" for example.

I am assuming you are also referring to my broken Spanish. I certainly should hope that the errors are pointed out in class for two reasons. One, to discuss why I made the error and then explain the correct way of saying what it was I tried to communicate. And two, to let all the new Spanish speakers know that in order to really learn a language you have to actually speak. You can't let the fear of making a mistake hold you back from learning a language. So I make mistakes. All kinds of Spanish grammar mistakes. Sure, I try to learn from them, and sure sometimes the mistakes are humorous to those I am speaking to, but hey - it's all part of the fun of learning a new language that is no doubt tied to a wonderful culture that is different from my own.
judy wrote on October 26th 08 at 02:45PM
lol, its nice to know some things never change. ^_^ william was just as unsympathetic to others sleeping woes 10 years ago. poor sam! *pats* and i'm really impressed at how y'all are immersing yourselves in the local culture and everything! loved the guatemalan snipe hunt btw, lol.

@Yancey: Haha - true. I believe you that the Quetzal exists. :) I really wish we could have experienced more of the Mayan culture, but we simply ran out of time. That'll have to be our next trip to Guatemala.
Fun Lilliy wrote on May 15th 09 at 10:39AM
you guys are addictive.. I just cant stop watching your videos and I have tons of work to do right now! :)
The incredible story of how two recent college grads are traveling around the world on an impossible budget.
More...
Popular Videos