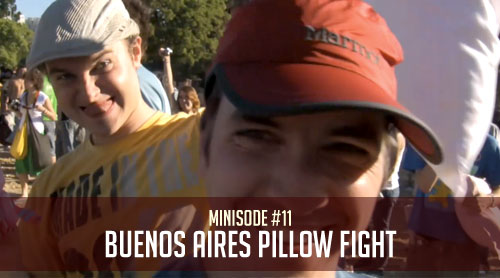 Scott wrote on February 21st 09 at 08:35AM
Poor William got the pillow-beat-down.

Much much better than "Stamos!"

Kyle wrote on February 21st 09 at 07:30PM
That was awesome!
Good soundtrack! Haha, it fit the video well. :D
Benny Lewis wrote on February 21st 09 at 10:40PM
Absolutely LOVED it!!! What an amazing afternoon - I'll be sharing this with everyone! You even got me waving my ass tauntingly at the 17 girls!
I don't think it's an annual event, it was a Flashmob organized over facebook etc.
Thanks so much for sharing this!! Looking forward to all future minisodes :D
Mom wrote on February 22nd 09 at 11:17AM
Too funny! The music was perfect with the action and the shot from above with all the pillows flopping was great! Why didn't you get the Foreigner beating? Maybe holding a camera protected you.

I wonder if you'll start something like this in Lexington. It looks like fun.
David wrote on February 23rd 09 at 04:49PM
That was hilarious!
shane wrote on February 24th 09 at 04:11PM
Hilariously awesome. System Of A Down went perfectly with the pictures. Good stuff.
Fun Lilliy wrote on May 15th 09 at 03:48PM
I fell to the ground when William had just started to hit people he was doing it so nicely then he got gang beaten by the others.. that was to funny I am still laughing..
The incredible story of how two recent college grads are traveling around the world on an impossible budget.
More...
Popular Videos