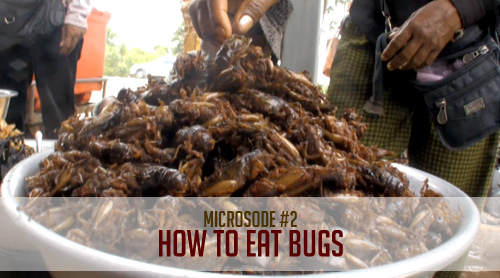 William eats a tarantula and Sam eats a fried cricket. Can they keep it down?

1) Gross.
2) Did you guys go back for seconds?
3) ... (no words)
Paula wrote on April 15th 09 at 12:00PM
You guys were really nice to each other! When I was in China, I was going to eat silkworms with the guys, but they got so disgusted trying them that I had to chicken out. A tarantula -and- a cricket. Not bad.
Braeden wrote on April 15th 09 at 02:01PM
so that pretty much sums it up. William is Bear Grylls
James wrote on April 16th 09 at 06:18PM
Bear Grylls comes to mind watching this... Glad you guys didn't hurl. What's the strangest thing y'all have eaten while there?

I got excited when William first chomped into it... haha! Glad to see things are going well.
Mills wrote on April 19th 09 at 05:39AM
Hey guys! Awesome clip. Had to watch it twice just to check I'd seen correctly! ;) Keep them coming. xXx
ruthe wrote on May 4th 09 at 12:42AM
Awesome! You guys would do Andrew Zimmern proud & he says tarantulas taste like crab. Is that true?
Fun Lilliy wrote on May 15th 09 at 06:15PM
OHHHHHHHH!!!!!
Jon wrote on September 11th 09 at 10:50AM
Hey Sammy! It's Jon here. I know exactly where you guys were! Its where the bus stops between Siam Reap and Phnom Penh right? I was tempted to try the spider when I was there, but decided against it before my stomach had become used to the weird foods. Luckily I did because I ended up getting heat exhaustion and passing out after getting back onto that bus!
The incredible story of how two recent college grads are traveling around the world on an impossible budget.
More...
Popular Videos