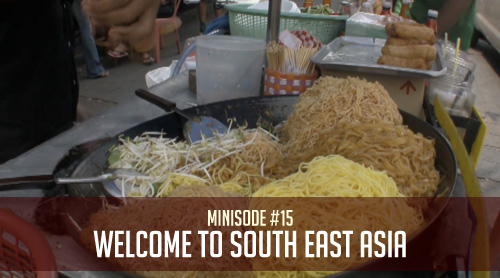 The two guys arrive in Bangkok, Thailand. William learns how to cook Pad Thai and the two try to hail a taxi without getting scammed again.

Thanks for looking out for us. ;)
kevin wrote on April 3rd 09 at 02:07PM
khao san pad thai = crap.
Corey wrote on April 3rd 09 at 06:35PM
Oh man, very cool. And definately a culture shock I imagine. Consider the tip about the taxis duly noted for when I make it there!
Enjoy Vietnam! Especially if you make it into the northern part. I believe Hanoi has amazing clothes makers for uber cheap.

daniel durick wrote on April 6th 09 at 09:56PM
oh man now i'm really craving some pad thai
Juliana wrote on April 19th 09 at 09:53AM
Thanks for letting me in on the meter thing. My brother and i are going to Thailand next month and i never knew about having to watch that.
The incredible story of how two recent college grads are traveling around the world on an impossible budget.
More...
Popular Videos